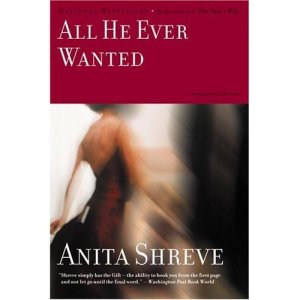 l He Ever Wanted” by Anita Shreve.  It is set back in the early 1900’s in a New England college town.  It is about a college professor that sees this woman and instantly falls in love with her.  He meets her and starts inviting her to go on walks with him around town.  It is obvious that he is in love with her and she is merely just fond of him.  He asks her to marry him even though he is aware that she may not love him back.  At first she tells him no because she admits she does not love him.  Instead of backing out gracefully he practically begs her to be with him.  He plays to her weakness and offers her an opportunity to raise her own children and run her own household instead of living with her sister and being a governess to her children.  She agrees to marry him when she sees how much her rejection has affected him.

They get married a couple of months later and immediately after the ceremony he finds her in a room looking in the mirror with a horrible look of despair on her face.  He is aware at that moment that she has regrets, but believes his love for her will win her over in time.  Their honeymoon is lackluster to say the least and he is unable to please her in bed.  During the day they seem to get along and have a friendly relationship, but it is very cold in their bed at night.  The book then flash forwards fourteen years later.  They now have a 13-year-old daughter and a 6-year-old son.  Everything is the same in their marriage.  He continues to love her more every day despite their horrible sex life and she continues to focus on her children and is merely friendly to her husband.  I haven’t finished the book yet, but it hints that she meets another man and their marriage somehow falls apart.  He is narrating the story from a time in the future when he is alone and traveling to his sister’s funeral.  The book has a thread of sadness throughout.  It doesn’t look like it will have a happy ending.

Yet, I am intrigued by this story because I can put myself in his place so easily.  As I read this story I want to scream at this man to wait for someone else who will really love him.  Yet if I’m honest, if I was in his position, I would probably be able to convince myself of the same things he does.  I would tell myself that this person would love me more over time.  I could also see myself reading into things to keep myself in denial about the reality of the situation.  I know other people can relate as well because I see this a lot in my office with people who are in love.  They don’t make any sense.  Nobody does when they are blinded by love.  They will torture themselves without mercy in order to be closer to someone they have deep feelings for.  Everyone around them is frustrated by their exercise in futility, but they continue to have hope that this person will love them back if they just try hard enough.  A person in love is so sad when they aren’t around their object of affection that they can’t believe they would ever be happy if they gave up their pursuit.  This is why unrequited love can go on for so long.

A person can also feel so happy in the presence of someone they love that they truly are blinded to how the other person really feels.  This story is also interesting to me in that love makes the guy somewhat selfless, but also selfish at the same time.  He would bend over backwards to make her happy in selfless acts of love, but doesn’t realize that not pushing her to

marry him and allowing her to eventually find someone she truly loved would have been the more selfless act.  Instead it seems incredibly selfish for him to push her to marry him in order for him to be happy.  He does not truly consider how she feels at all because it is hard for him to imagine her not as happy as he is.  The woman in the story is also in the same boat.  Some people would say she was truly selfless to give herself to this man who truly loved her so much.  She gave up her own happiness to make him happy.  Yet, she holds herself back from ever growing to love him.  She only marries him because she wants to have her own children and because she feels sorry for him.  She may have believed at the time that she would never have the chance to marry someone else and have her own family.  She then uses him to gain those things she desires.

I think it is ironic that he marries for love which is what most of us aspire to, but it isn’t a good thing.  She marries to make someone else happy, which is another seemingly selfless act, however it back fires horribly.  My point in unrequited love happens to the best of us.  I don’t understand the reason for it because it doesn’t make sense for someone to have to suffer so much.  That suffering usually leads people to make unwise decisions.  It is easy to see from the outside, but from the inside it becomes blurry.  No one wants to be in pain.  Unrequited love is painful.  The brain tells you that this person makes the pain go away.  Therefore you will stop at nothing to be around this person, even though another part of your brain tells you that you’re only making it worse by continuing to put yourself in this position.  Only time will make it more painful to be with someone who truly isn’t into you than to be around them.  When that time comes, it is easier to walk away and be open to finding someone else to love.

It can be a long process to find someone who equally loves you as much as you love them.  It always seems to me that a lot of relationships are unbalanced in the love department.  After reading this book, I would encourage people to wait for the one that loves you back and don’t settle for someone that you don’t really love just because they love you.  It doesn’t usually work out well because years of a marriage can easily build up resentments.  It is better to start off as equally as you can because marriage isn’t easy in the best circumstances.  I also recommend this book to anyone who has gone through unrequited love.  It is an excellent read.