If you are close to graduating and living out in the real world, money and living issues are going to become a part of your relationship.  It’s not the sexiest topic, but it causes a lot of stress in relationships.  Unfortunately, most people don’t get into relationships with someone who is similar to them in spending or living habits.  This can be a good thing.  Where you are weak, they can be

strong.  However, I meet students who don’t really pay attention to how their boyfriend or girlfriend spends money or if they clean up after themselves, and this can be a problem if you plan to move in together in the future.

Some people look forward to being in a relationship and being “taken care of”.  Even in college they start dating someone someone who takes care of buying everything when they go out.  I also know people who start dating someone in college who comes over and does their laundry or cleans their apartment for them.  Some people like this arrangement at first because on one side it makes life easier and on the other side its nice to be needed, but it is still a good idea to pay attention to your differences.

If your boyfriend spends all his money on food and entertainment on a limited budget and freaks out when the rent is due, how do you think he is going to manage the money when he is making a lot more of it?  It may be nice that he pays for your night out, but not if you have to worry every month if he is also paying his rent.   If your girlfriend spends her refund from her student loans on tanning, make up and new shoes, do you really expect her to be more frugal once she is living with you?  You may be proud of how she looks on your arm, but you may not be so happy when you are the one paying all the bills when she has no money left.

The other thing to notice is their living habits and how they take care of their stuff.  If you always come over to your boyfriend’s place and have to clear a space in his room to sit down, be prepared to be clearing a space and doing a lot of the other cleaning chores when you live together.  If your girlfriend always asks to go out to eat instead of staying in to cook dinner for the two of you now, don’t expect her to become a world famous chef when you move in together.

It takes a lot of compromise to live with someone who has very different living or spending habits than you.  It can be done, but again, you may have to do more than you bargained for in the relationship.  A saver won’t be able to save as much money as they want to, and a spender won’t be able to spend as much money as they want to.  A neat freak will have to live with a little messiness, and someone who doesn’t clean up after themselves may have to do the dishes once in a while.  You will have to step up or let go in some areas depending on your personality.  The other option is to find someone who operates just like you do, and then you can live in peace and harmony all the days of your life.

Well, it isn’t really that easy, but you know what I’m trying to say.  I’m a big promoter of being involved in all aspects of your relationship.  You should know how to take care of things your partner usually takes care of.   Even before you live together 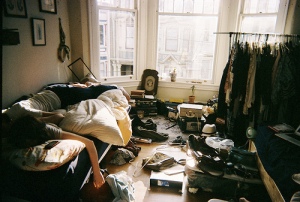 you should communicate about money and how each other takes care of your living space and other things you own.   Make sure both of you are on the same page.  It will save a lot of headaches down the road.

Also, another helpful thing to notice before moving in with someone is whether they are grateful and appreciate what you bring to the table or if they take you for granted or constantly try to change you.  Whatever they are doing now, they will probably do in the future.  An appreciative person will probably compromise and try harder to make you happy.  However, someone who is taking you for granted now, will be expecting you to do a lot for them in the future and feel that somehow you “owe” them.  Also, someone who is trying to change all your habits and won’t compromise now, will still be trying to control every aspect of your relationship in the future.

Even though most people in college aren’t in super serious relationships, you want to start observing behaviors once you do decide to settle down.  Know what you can and can’t deal with in a long term relationship.  Money and living habits are big issues that cause a lot of conflict.  Know how your partner spends money and be involved in the financial decisions once you start living together or get married.  Also, figure out a way to work out how you want to share your living space.  Don’t assume the other person will “take care of” you.  That person may not always be there or they may not be taking care of things in a good way.  Learn from the mistakes of couples who have been through it and try to be smarter in your own relationship.  It will be worth it.

4 comments on “What to Know Before Moving In Together”